82%— the amount of new rental housing built in the US  as luxury priced housing according to a 2015 study commissioned by the Wall Street Journal. We are under-building housing for lower and middle income households.  *

58— the number of available affordable housing units nationwide for every 100 households earning less than 50 percent of Area Median Income. In most central city locations, the supply of affordable units was far lower.

2 million— the number of affordable rental units in the US needed to meet the need of renter households with income at 50% of AMI or less. *

Most government programs support housing for families below 60 percent of area median income, but there is an emergent need in many communities for housing that is affordable to families between 60 percent and 120 percent of median income, often called middle-income housing. In many places, inclusionary housing programs are among the only tools for creating housing that is affordable to this income group.

Is it fair to ask one group (real estate developers) to help solve a broad social problem?

Yes: When housing prices rise, we all pay the price, but one group – owners of developable land and developers of real estate – receive the profit. Inclusionary housing programs recapture some share of the increase in land values to help the people who are most negatively impacted.  Developers and property owners should certainly not be alone in addressing the need, but it is sometimes fair to expect them to bear some of the burden since they often receive financial benefits from rising housing costs. Inclusionary housing only ever provides a small share any community’s affordable housing opportunities.  The vast majority of affordable housing is directly subsidized by taxpayers through federal, state and local government programs.

If the problem is that we aren’t building enough housing, shouldn’t we just build more?

Yes: But we aren’t likely to build enough housing to solve the affordable housing problem in growing regions.

While it is clear that the high cost of housing is the result of building less housing than necessary to accommodate a growing population, the reasons for this under-building are complex. Many argue that planning and zoning regulations are overly burdensome and result in less housing production and higher housing costs. But while it is easy to oppose costly restrictions, each of our zoning and planning rules has been imposed for specific reasons. It is difficult to imagine voters in most cities removing rules that protect existing neighborhood character, ensure health and safety in new housing or limit the parking and traffic impact of new development.

It makes sense to do everything within reason to reduce unnecessary regulatory burden on housing developers, but even sensible and popular limits on land use and building quality are likely to mean that we build less housing than our high-growth regions need.  This in turn means that we will need proactive affordable housing strategies for the foreseeable future.

And, while any increase in the supply of housing helps address the problem, it is easy to underestimate just how much more we would need to build before we got to the point that we didn’t also need affordable housing programs. San Francisco’s chief economist estimated that the city would need to build more than 100,000 new housing units before the additional supply would reduce the market rent citywide to a level that was affordable to lower-income residents. That is more new housing than has been built in San Francisco since the 1920s.

Yes: But probably not enough. It might stand to reason that development of housing—any kind of housing—would lead to lower housing prices. In most urban areas, however, the opposite occurs. Construction of new housing impacts the price or rent of existing housing in two different ways simultaneously. As the basic notion of supply and demand suggests, the addition of new units in a given housing market will inevitably put some downward pressure on the cost of existing units. But in regional housing markets, the units that become less expensive may be far out on the suburban fringe, far from jobs and opportunity.

At a more local level, new development often creates upward pressure on housing costs because new housing is primarily built for higher-income residents. A 2015 study commissioned by the Wall Street Journal found that 82 percent of new rental housing in the US was luxury housing.* Not only do the new units have higher rents, but the new higher-income residents spend money in ways that create demand for more lower-wage workers in an area; this, in turn, creates more demand for housing in the area and ultimately raises housing costs.

Modest price increases in a region can translate into very acute increases in specific neighborhoods. The lower costs resulting from increased supply may be apparent only at the suburban fringe of the region, while new luxury housing may cause dramatic upswings in the price of residential real estate in central neighborhoods.

This document briefly summarizes a variety of potential dedicated revenue sources to support affordable housing development, including taxes and fees, voter-approved bonds, debt and equity funds, and special purpose revenue districts. For each type, the matrix describes how the revenue source works, how it is implemented, its revenue generating potential, as well as some examples. View Policy Brief 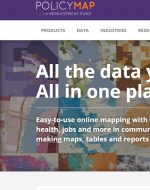 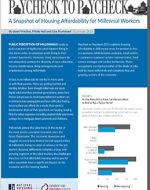 This tool makes it easy to compare wages and housing costs to visualize the challenge that American workers face in paying for housing. The database includes wage and housing cost data from 108 regions and 81 common occupations. Paycheck to Paycheck Tool