Differences in poverty rate in the neighborhood where kids grow up make a bigger difference to their economic future than differences in parents income.* Children who grow up in neighborhoods of concentrated poverty face lifelong health challenges, increased odds of incarceration and reduced lifetime earnings.* By contrast when lower-income families live in economically mixed communities, their children have essentially the same health and economic outcomes as children from higher income families.*

While we have understood the negative consequences of economic segregation for decades, recent research has shown just how hard it is to achieve economic integration through traditional affordable housing strategies. A 2012 study found that the vast majority of subsidized affordable housing has been located in neighborhoods with poor performing schools.*

By contrast, the results of another 2012 study suggest that inclusionary housing programs have been more successful in achieving this goal. The typical inclusionary home was in a neighborhood where only 7 percent of the population lived in poverty (half the national average for all neighborhoods). Children in these inclusionary units were assigned to schools with state test score ranks in the 40th to 60th percentile and with lower than average numbers of students eligible for free lunches.*

Yes: Since the mid-1980s, a broad consensus among scholars and urban planners has emerged in support of the idea that housing policy should encourage the creation of more mixed-income communities. In one example, the Pew Charitable Trust’s Economic Mobility Project followed 5,000 families to determine whether children moved up or down the income ladder relative to their parents. Surprisingly, the study found that differences in the poverty rate in the neighborhood where children grew up strongly predicted their economic mobility as adults, even more strongly than differences in their parent’s education level, occupation, or other family characteristics.*

It is easy to see that children who live in distressed communities face tougher odds, but what we haven’t been able to prove before is whether families whose kids would face significant obstacles in any event, choose to live in distressed neighborhoods or whether it is something about the places themselves that negatively affects the kids.

A 2015 study from Harvard University* has added very strong new evidence to support the conclusion that the places themselves matter. Economists studied children who moved from “worse” to “better” neighborhoods and found that kids who grew up in better neighborhoods earned more as adults when compared to kids who didn’t move or who moved to a worse neighborhood. And the effect grew over time. The younger kids were when they moved, the greater the gains. This research suggests that housing policies encouraging greater economic integration will lead to better economic outcomes for lower-income children.

Can inclusionary help a city meet its obligation to Affirmatively Further Fair Housing?

Yes: HUD’s Affirmatively Furthering Fair Housing (AFFH) rule requires jurisdictions that receive federal housing funds to proactively plan for overcoming racial segregation. Decades of experience with fair housing enforcement has shown that removing discrimination in the leasing and sale of homes is generally not enough to overcome racial segregation. Inclusionary housing has been one of the most successful strategies that communities have used to ensure economic and racial integration of higher opportunity neighborhoods.

Can inclusionary housing be used to prevent gentrification and displacement?

Yes: In historically disinvested communities and communities of color, new market-rate housing can help trigger gentrification and ultimately displacement of long time lower-income populations. Inclusionary projects, particularly those with a sizable share of permanently affordable housing units, can help ensure that new development helps to stabilize rather than displace the existing community. Researchers at UC Berkeley found that development of new affordable housing was significantly associated with lower levels of displacement in gentrifying neighborhoods.* 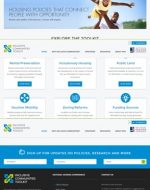 Inclusionary housing is just one of several strategies described on the National Housing Conference’s Inclusive Communities Toolkit. The site provides an overview of the full range of strategies that communities employ to promote and protect economic diversity. Visit Website