When people work to make our cities better places, they contribute to rising housing costs. Public investment in transit, roads, schools, and parks that make neighborhoods livable and walkable further increase housing demand. Ideally, everyone would benefit from improved cities, but in reality, the benefits of improvement are not shared equally. As housing and land costs increase, a relatively small number of landowners receive most of the benefit while, often, the lowest income local residents bear much of the burden in the form of higher rents and displacement pressure.

Residents looking for a new home soon face a choice among several undesirable options: longer commute times, overcrowding, substandard housing, or paying so much for housing that there is not enough left for other essentials.

Recognizing that this market-driven dynamic will not change naturally, more and more communities have been consciously seeking to promote mixed-income development. Rather than accepting the assumption that economic growth must automatically lead to economic exclusion, they have been developing local policies that seek to increase economic inclusion.

Is it fair to ask one group (real estate developers) to help solve a broad social problem?

Yes: When housing prices rise, we all pay the price, but one group – owners of developable land and developers of real estate – receive the profit. Inclusionary housing programs recapture some share of the increase in land values to help the people who are most negatively impacted.  Developers and property owners should certainly not be alone in addressing the need, but it is sometimes fair to expect them to bear some of the burden since they often receive financial benefits from rising housing costs. Inclusionary housing only ever provides a small share any community’s affordable housing opportunities.  The vast majority of affordable housing is directly subsidized by taxpayers through federal, state and local government programs.

If the problem is that we aren’t building enough housing, shouldn’t we just build more?

Yes: But we aren’t likely to build enough housing to solve the affordable housing problem in growing regions.

While it is clear that the high cost of housing is the result of building less housing than necessary to accommodate a growing population, the reasons for this under-building are complex. Many argue that planning and zoning regulations are overly burdensome and result in less housing production and higher housing costs. But while it is easy to oppose costly restrictions, each of our zoning and planning rules has been imposed for specific reasons. It is difficult to imagine voters in most cities removing rules that protect existing neighborhood character, ensure health and safety in new housing or limit the parking and traffic impact of new development.

It makes sense to do everything within reason to reduce unnecessary regulatory burden on housing developers, but even sensible and popular limits on land use and building quality are likely to mean that we build less housing than our high-growth regions need.  This in turn means that we will need proactive affordable housing strategies for the foreseeable future.

And, while any increase in the supply of housing helps address the problem, it is easy to underestimate just how much more we would need to build before we got to the point that we didn’t also need affordable housing programs. San Francisco’s chief economist estimated that the city would need to build more than 100,000 new housing units before the additional supply would reduce the market rent citywide to a level that was affordable to lower-income residents. That is more new housing than has been built in San Francisco since the 1920s.

Possibly: There is some evidence that it is possible to set affordable housing requirements so high that they cause developers not to build or landowners not to sell. If this happens it can result in reduced supply of housing and ultimately higher housing prices. However, the data suggests that programs that provide incentives and flexibility can successfully require significant affordable housing without any impact on market supply or prices.

There seems to be agreement that inclusionary programs could theoretically diminish the supply of housing and therefore increase prices, but there is no agreement about how often this happens or how significant the impact is. A study by the libertarian Reason Foundation concluded that the production rate of market-rate homes fell following the adoption of inclusionary housing policies in Southern California.*

While inclusionary housing programs directly impact the cost of development, they indirectly impact the price of developable land. When we increase the costs that developers face, we necessarily lower the amount that they are willing to pay for land. Understanding how these requirements impact land values is vital for designing policies that appropriately allow communities to share in the benefits of new construction without stifling development.

The term “residual land value” refers to the idea that landowners end up capturing whatever is left over after the other costs of development. When the cost of construction rises, it might hurt developer profits in the short term, but higher costs will then cause all developers to bid less for development sites. As land prices fall (or rise more slowly), developer profits tend to return to “normal” levels.

When a city requires developers to provide affordable housing, they are likely to earn less than they would have if they had been able to sell or rent the affected units at market value. This forgone revenue represents the “opportunity cost” of complying with the affordable housing requirements. It is fairly easy to calculate this “cost” for any given mix of affordable housing units and, if these requirements are predictable in advance, they should roughly translate into corresponding reductions in land value over the longer term.

Most inclusionary housing programs don’t simply impose costs; rather, they also attempt to offset those costs (at least, in part) with various incentives for the developers. The most common incentive is the right to build increased density (e.g., building taller buildings, building more units in place of providing parking, etc.). When developers can build more units, the extra income can offset the costs of providing affordable units, and the result will be a smaller (if any) reduction in land value.

But incentives frequently don’t fully offset the cost of providing affordable housing. In these cases, there is a real net cost which exerts downward pressure on land prices. If the net cost is small relative to land values, and if it is applied consistently and predictably, landowners will have little choice but to accept reduced prices. But, if the net cost is too great, landowners may choose not to sell their properties, and the result will be that the program prevents development that would otherwise have happened. Inclusionary housing programs have to work hard to understand land markets in order to avoid this situation.

Land values don’t change overnight, and some communities have carefully phased in inclusionary requirements with the expectation that developers, when they can see changes coming, will be able to negotiate appropriate concessions from landowners before they commit to projects that will be impacted by the new requirements. Similarly, some program designs are likely to have a clearer and more predictable impact on land prices than others. More universal, widespread, and stable rules may translate into land price reductions more directly than complex and changing requirements with many alternatives.

Can inclusionary housing be used to prevent gentrification and displacement?

Yes: In historically disinvested communities and communities of color, new market-rate housing can help trigger gentrification and ultimately displacement of long time lower-income populations. Inclusionary projects, particularly those with a sizable share of permanently affordable housing units, can help ensure that new development helps to stabilize rather than displace the existing community. Researchers at UC Berkeley found that development of new affordable housing was significantly associated with lower levels of displacement in gentrifying neighborhoods.* 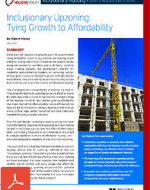 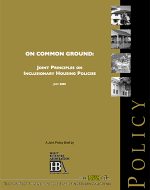