Many cities allow developers to build required affordable units on another site separate from their market-rate projects. In many cases, it can be less expensive for developers to create separate buildings where all of the units are affordable.

There are a number of reasons why this might be the case.

Sometimes builders can save money by building affordable units to a different (lower) standard. While there is a risk that this might involve substandard affordable units, there may be important savings even when the affordable units are built to a very high standard. For example, developers of high-rise luxury towers can often produce several nearby high-quality affordable units for what it would cost them to sell one of their luxury units at an affordable price.

Buildings with all affordable units are frequently eligible for tax advantages or subsidized financing. If a program allows developers to access these benefits, it is often possible to build many more affordable units off site for the cost associated with fewer units on site in a mixed-income building.

In spite of the potential efficiency, many communities choose not to allow offsite development because of the importance that they place on economic integration of affordable homes within mixed-income buildings. In other communities, off-site development is allowed but its potential negative consequences are addressed in two ways:

Increased requirement for off-site projects: If the off-site option lowers the cost of providing affordable units, communities sometimes require developers to share some of that benefit by providing more total units in off-site projects than what would have been required had the units been provided on site.

Off-site location limits: In addition, some communities require that off-site projects be located nearby the market-rate projects that generated the requirement. They limit the location of these projects to prevent developers from concentrating off-site projects in lower-income neighborhoods where land is less expensive and the need for affordable housing is lower.

Santa Monica has one of California’s older inclusionary housing programs. It allows developers the option of providing units off site, but only when doing so will result in additional public benefit. Specifically, Santa Monica requires that builders provide 25 percent more affordable units in off-site projects than would have been required on site. To promote economic integration throughout the community, off-site projects must be located within a quarter mile of a market-rate project, though projects up to one mile away are allowed if they will not result in overly concentrated affordable housing.

San Diego’s inclusionary housing program allows for developers to meet their affordability requirements through on-site affordability, payment of a fee, or off-site development. The off-site option is subject to administrative approval from the city’s planning director and the CEO of the San Diego Housing Commission. The city’s location preference for off-site development is within the same community planning area as the market-rate development. However, these units may also be located outside of the community planning area if the reviewing staff finds that two conditions are met:

West Sacramento allowed developers to acquire, rehabilitate existing market-rate units and convert them to deed restricted affordable prices to meet their inclusionary program requirements in redevelopment areas. (Redevelopment areas were subsequently eliminated by California.) The developers could either rehabilitate and preserve an equal number of units in the same plan area or twice as many units in another area of the city.

Should off-site development be encouraged?

It depends: Off-site production can be a valuable tool for cities if it is done right. Offsite units can be constructed by the developer of the market-rate project that generates the requirement, by another private developer or by a nonprofit partner. In addition, a number of cities offer developers the option of donating land to the city or an approved partner which facilitates offsite production without requiring the market-rate developer to actively participate in the affordable project.

How do we ensure that off-site inclusionary units actually get built?

It can be challenging for cities to ensure that developers actually build the offsite inclusionary units that are promised. Unless the off-site units are completed before a Certificate of Occupancy is issued for the market-rate project, the city may have limited options for enforcement if a developer fails to fulfill its obligations.

Some cities like West Hollywood, California address this kind of risk by requiring that off-site units be occupied before completion of market-rate projects. Boulder, Colorado instead allows developers one year to produce offsite units if they provide a bond or other financial guarantee to ensure that the units actually get built. If the affordable units are not produced within one year, the city can collect the original in-lieu fee plus a penalty of 8 percent. 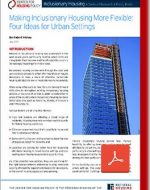 This policy brief presents four ideas for improving the flexibility of inclusionary housing and expanding the menu of options available to developers – while at the same time promoting mixed-income neighborhoods. View Policy Brief