Almost all jurisdictions require developers to execute some form of developer agreement. These agreements generally specify in detail how the inclusionary obligations will be met, which units will be designated as units meeting the requirements, and how construction and marketing of those units will be phased.

PolicyLink* describes how the City of Salinas, “provides developers with sample Affordable Housing Plans for either ownership or rental projects. Each template includes a description of the project and a proposal describing how the developer will satisfy the city’s inclusionary requirements including:

According to PolicyLink: “Developers in Salinas must submit these plans along with their first application for planning approval for any new residential project covered by the towns inclusionary ordinance. The affordable housing plan is then considered along with other project plans and approved by either the planning commission or city council depending on the project. Once the terms of this plan are approved, the key provisions are incorporated into an affordable housing agreement that is recorded against the property prior to subdivision of the property or approval of any building permits.” 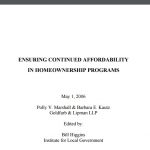 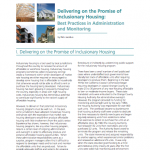 Inclusionary housing programs require a certain level of ongoing administration and oversight in order to effectively produce and preserve affordable housing opportunities. This paper outlines several of the common tasks associated with ongoing administration of inclusionary housing programs and describes some of the approaches to staffing and paying for their implementation. The paper also provides an overview of the choices that have the greatest impact on the jurisdiction’s administrative workload.  View Paper 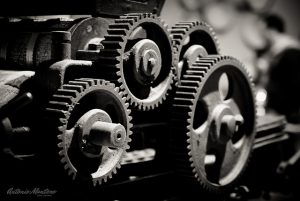